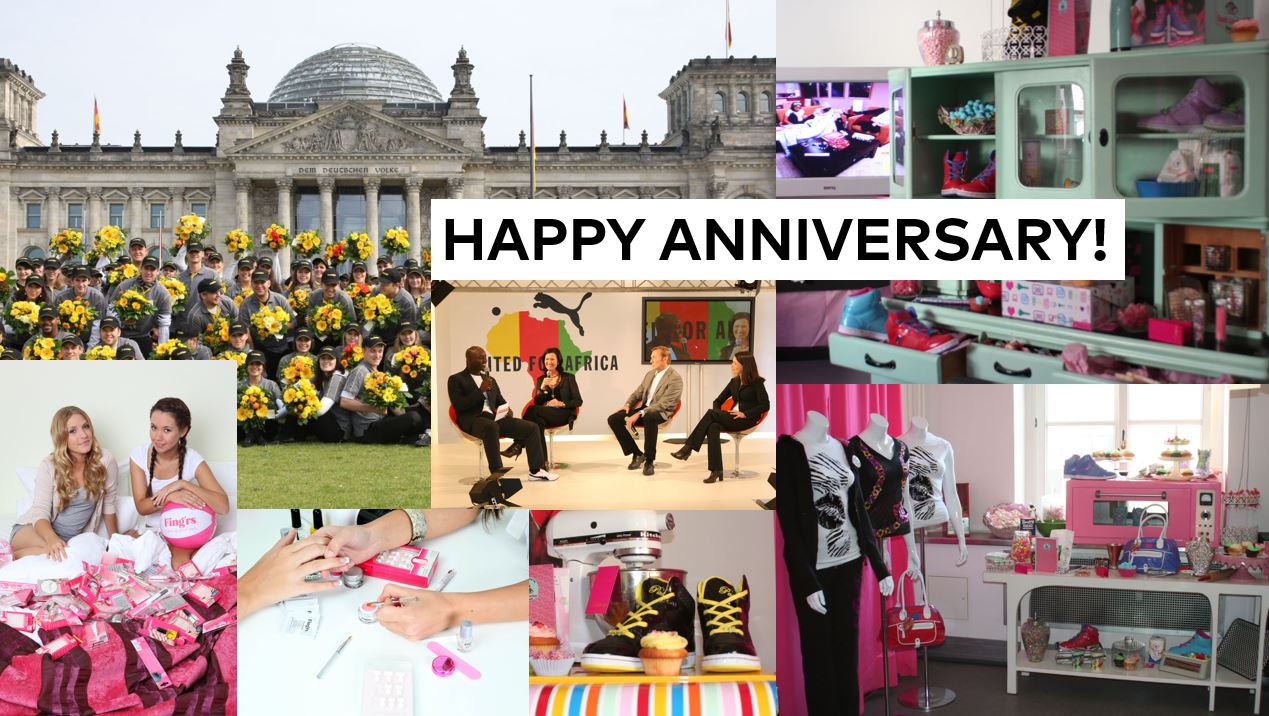 It’s party time at ZUCKER.Berlin! Not only because our (Corona-compliant!) summer party took place last week in Torstraße, but our Managing Partner Jennifer Meißner also celebrated her 15th ZUCKER. anniversary.

Many things can happen in 15 years, and also many projects. This anniversary is the perfect occasion to take a little trip back in time.

Jennifer started at ZUCKER. in 2006,  as a volunteer, like most new ZUCKER. colleagues. Her first clients: Tiger Beer, GameDuell and Fleurop. Nowadays, as Managing Partner, she has an overview of all teams and clients. But what happened in between? Which campaigns did she support? In a three-part throwback, she introduces us to her favourite ZUCKER.projects and campaigns – from 2006 to 2021. Are you ready for Part 1? Warm up the time machine, we’re going back to the 2000s! Musical background included… #partymood

German earworm warning: “54, 64, 90, 2006, ja so stimmen wir alle ein! Mit dem Herz in der Hand und der Leidenschaft im Bein werden wir Weltmeister sein!” (a song mainly about Germany going to be the World Cup champion). In 2006, the FIFA World Cup took place in Germany and was THE focus of communication. At that time, ZUCKER. supported the sneaker brand PUMA as international lead agency for the campaign “Welcome to football”. PUMA had already been involved in the promotion of football in Africa for many years and was now also drawing attention to the continent by cooperating with the charity campaign “Together for Africa”. As part of this cooperation, ZUCKER. created a “United for Africa” tram and a special fashion collection that was partly auctioned for charity. ZUCKER. also took over the planning and organisation of two international press conferences including a fashion show, street party and celebrity parade on the red carpet as well as international press support.

Them baggy sweat pants and the Reeboks with the straps? Not only Flo Rida’s “Low” song about the cult sneakers was launched in 2007, but also Foot Locker’s Pastry Showroom (or should we say Shoeroom). We take you to the candy shop: a ZUCKER.sweet candy land in pastel colours was created in the ZUCKER.Office (more precisely in Jennifer’s current office, which was still a small conference room back then) to present the sneakers designed by the daughters of Run-DMC’s Run (a.k.a. Joseph Simmons) during the German Press Days. Vanessa and Angela Simmons designed shoes that were exclusively available at Foot Locker at the time. To celebrate the sneaker models, Jennifer and other ZUCKER.colleagues spent a whole day to find decorations, furniture and accessories in 50s Candy Land style. Cupcakes, sweets and other candies en masse – we take our agency name very seriously! For at least one month we could live off the sweets…

Bleeding Love by Leona Lewis or rather Blooming Love by Fleurop? While Leona sings about heartbreak in 2008, the flower company is celebrating its 100th anniversary: 100 years of giving flowers for the love, joy and all other emotions a bouquet brings. ZUCKER. staged this anniversary while communicating Fleurop’s development towards today’s modernity. For one day is not enough to celebrate this remarkable anniversary, we made it a year-long party: the campaign included, among other things, a book about their story , the German Florist Championship and “Fleurop beschenkt Berlin”, a campaign in which 100 Fleurop ambassadors gave away bouquets in Berlin. Jennifer and her Fleurop team obtained official permission to hand out bouquets of flowers to passers-by in front of the Brandenburg Gate before spreading out in small groups in the city. We rented out the Felix (a now defunct posh Berlin club) for the preparation and follow-up to get ready together and celebrate the success afterwards. The campaign video for the 100th anniversary was even rewarded with the Intermediate Globe Silver. Thanks for the flowers!

“Papa-paparazzi” alert! In 2009, ZUCKER. and Fingr’s were looking for the best girlfriends BFFs in 2009 to make them happy in a really girly kind of way. How? With an extensive shopping tour and a professional model shoot in the penthouse suite of the Lux Eleven – Lady Gaga could have provided the soundtrack. Inseparable beauty queens could share their best girlfriend BFF moments online with Fingr’s professional manicure. In the next round, 15 dream teams were selected, from which one winning couple was chosen and invited to Berlin for a girls’ trip. The highlight of the whole promotion? The winners started their modelling careers with a poster campaign and advertisements in German girls’ magazines like Bravo and Mädchen. A dream come true! And just for the anecdote, after hours, the conference rooms of the ZUCKER.office were put to good use: after so many mails and so much typing, the team really put the UV lamps and the Fingr’s gel nail to good use.

Lyrics guess with ZUCKER.: “I only wanna break, break, your, break, break your….”? Hint: Taio Cruz’s first big hit from 2009. But we don’t want to break anything, we want to breakdance! We were responsible for the PR for Red Bull Flying Bach in the Neue Nationalgalerie. Under the direction of conductor Christoph Hagel, the 4-time breakdance world champions Flying Steps translated Bach’s classic “Well-Tempered Clavier” into the 21st century. ZUCKER. was responsible for the PR for the premiere with a focus on artist portraits, rehearsal accompaniment and interviews – believe us, the phones didn’t stand still, our inboxes exploded, the demand was so great. Journalists were clamouring for interviews and invitations to the premiere event. The result: 15 sold-out shows as the fundation for a worldwide success.

Arriving in the 2010s, we pause our time travel for a short drink break and to digest these many impressions, which could not be more different. In the next blogpost, we start with not one but two of Jennifer’s favourite campaigns. Spoiler: It’s going high! I wonder what it could be all about? Stay tuned…