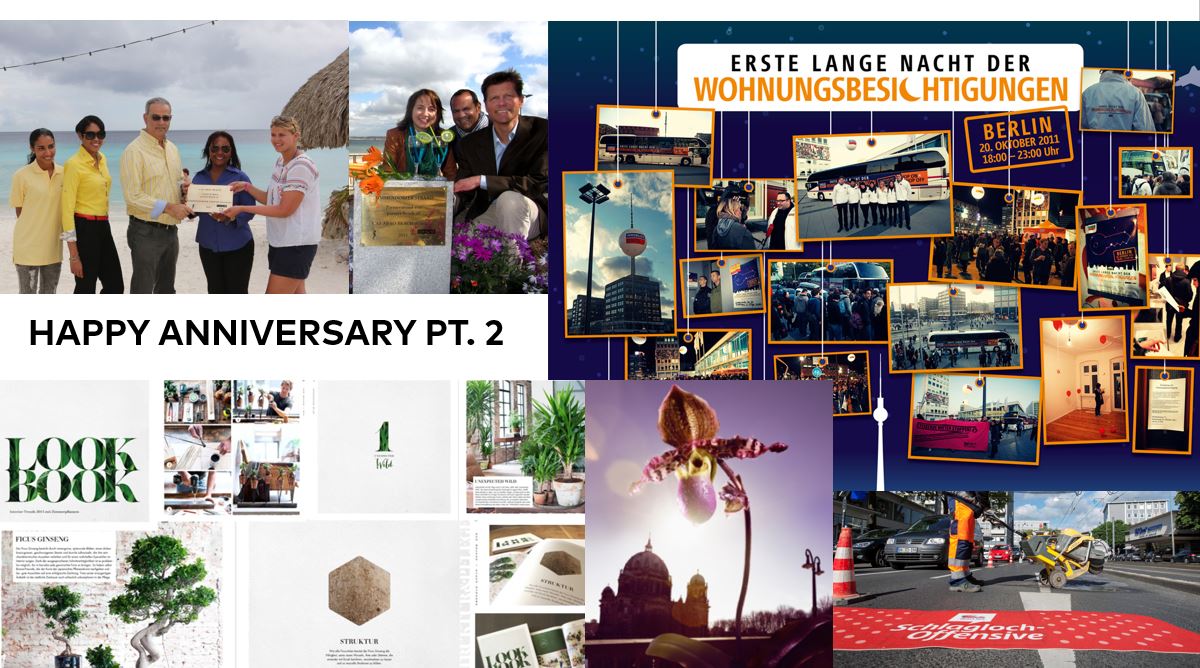 Are you ready for the next journey back in time to the 2010s? In our last blog post, we presented our boss Jennifer Meißner’s favourite campaigns for her 15th ZUCKER. anniversary – from her start at the agency in 2006 to the Red Bull Flying Bach mega-success in 2010. Today, we’re revisiting new memories from the last 12 years. We start in 2011. Musical background is of course again included in this trip into the past….

2011 was an exciting year at ZUCKER.! Jennifer met Dave Grohl at the Jägermeister high seat tour – the “biggest success” of her PR career so far, as she says 😉. After not daring to go up on the high seat with her, he apologised and explained to her, publicly, in front of the audience, as a headliner, that he (coming as he is) is insanely afraid of heights, but that he and the whole band are absolute Jägermeister fans. Shortly afterwards, words were followed by deeds and one or two shots were taken on stage. Jennifer films everything (for the record, of course). Fun Fact: until a few months ago, there were rumours in the agency that she had once been together with Dave Grohl, because a photo of the two of them together decorated her Windows desktop. Long story short: they weren’t, but they had an unforgettable high-sit moment.

But that was far from all in 2011…As Jennifer Lopez said (or sang) so beautifully this year: “You know we’re running shit tonight on the floor, break a sweat on the floor, yeah we work on the floor”! Which floor? Which floor? Which flat? Which house? No idea what J.Lo’s answer would be, but our Jennifer certainly answers with the “Long Night of Apartment Viewings”: ZUCKER. designed a rather unconventional event for Germany’s largest online real estate marketplace. The dance floor gives way to the flat corridor. 1 night in Berlin – 8 districts, connected by shuttle buses – 50 participating realtors, property management companies and housing associations – 150 open flats – more than 2,000 participants. Those who despaired of finding flats in Berlin during the day and could not spontaneously make it to the open viewing due to work, children or other reasons were welcome to enter the flats marked by branded doormats that night. In addition to the conception of this emotionally experiential flat hunt, our main task was to arrange interviews and exclusive press tours as well as to design out-of-home advertising measures. For this ImmobilienScout24 campaign, we received the PR Report Award 2012 for the best live and event communication.

Back in 2011, Kristian Schuller photographed magnificent orchids as Natural Supermodels against the backdrop of major German cities. Who knows Phalaenopsis Rossini, Cambrua Wild Cat and Oncidium Sweet Sugar? Remember the names – timeless natural beauties! Against the urban backdrop of Berlin, Hamburg and Munich, their naturalness shines in full bloom. The campaign and the high-gloss shots by the well-known fashion photographer were so well received that the campaign went into the second round in 2012. To quote a German hit song that also shone that year: “Leider geil!” (In English: Unfortunately awesome!) Shooting with Kristian at 04:30 in the morning at the Brandenburg Gate? Unfortunately awesome, when the sun rises behind the Berlin landmark and the Natural Supermodel shines in all her glory. The photo in front of the Brandenburg Gate was indeed one of the signature pictures. To get this picture, nothing was too good for Jennifer and the team – despite the cold and tiredness, they met in their snow suits and shivered in the wind with the lush green models. But the hard work is worth it, the picture turned out fantastically beautiful and the memory of this shoot will last forever.

Vamos a la playa? The song has been around longer than 2013, but it describes our mood pretty well when we think of the beaches of Curaçao in the Caribbean. At the ITB – the international trade fair for the tourism industry – we set up a beach partnership between Timmendorfer Strand on the German Baltic Sea and Cas Abou Beach on the Caribbean island for the Curaçao Tourist Board. Town twinning has been around for quite a while, why not beach twinning? This question and our answer were the communicative highlight of the ITB trade fair. The highlight of this campaign: the idea of a beach partnership was an absolute no-brainer. All we needed were two brass signs, and poof! What was the point? Intercultural knowledge exchange and mutual popularity! Absolute win-win situation and a lot of fun in communication…

Just like 2011, 2013 was an exciting year and Jennifer had two favourite campaigns to share with you. Road safety cannot be stressed enough. Miley Cyrus could take apart walls with her “Wrecking Ball” in 2013, ZUCKER.Kunde Direct Line patched potholes instead. Nothing is more annoying, and dangerous to boot, than large and small potholes in the road – ZUCKER. and Direct Line recognised a new trend in this problem, because what have participants of road traffic ever complained about more? In a pothole offensive, the car insurance company called on citizens to report disturbing potholes so that they could be repaired as quickly as possible. In agreement with the authorities, Direct Line was the first German company to sponsor the repair of 80 potholes in Berlin. A mature achievement and such a great success that the campaign was directly extended to Cologne.

Where would we be today if it weren’t for the Amazon Fire TV Stick? Good question, next question… The magic stick has already been around for seven years, and in 2014 it was ceremoniously launched in Berlin’s high-class location e-werk – to coincide with the Global Trade Show IFA. ZUCKER. helped prepare the international launch event and the e-werk was transformed into a design flat. To get everything ready for the launch, our boss Jennifer practically lived in the e-werk. The result is impressive: 50 journalists from top European outlets were attended the event and reported on the elaborate event around the new Amazon product. Very “fancy” – just like Iggy Azalea’s hit in 2014.

Coffee table book in glossy format? Nice! Coffee Table Book in glossy format with green plant content? Premium! On over 50 pages, ZUCKER. presented the 12 indoor plants for each month of 2015, including care tips, styling inspiration or DIYs as well as the three major Plant trends “Unexpected Wild”, “Eco Deluxe” and “Happy Life”. We made clear it is impossible to imagine today’s design world without plants. Fragrant. Haptic. Aesthetic. Just like the plants themselves. The pages featured haptic structures of plant leaves or barks, for example. Also in the book: scented elements that appealed to the sense of smell. Smell, feel, see – this look book is an experience in itself. We thought it was great, the PR Report did too: Award-Alert! The “Sieh-Fühl-Riech” lookbook won the coveted award in the category “Corporate Media analog”.  At least we stole the show, just like Kygo did on every dancefloor with his eponym track.

Which of you is the proud owner of their own balcony? Congratulations! We didn’t want to deprive everyone else of this happiness – at least for one day. In Berlin, Hamburg, Munich and Cologne, four people suffering from balcony wanderlust were selected to receive a green outdoor extension via a lifting platform. Since ZUCKER. doesn’t do things by halves, the One-Day-Balcony was planted, decorated and furnished in autumnal style, so that the Indian summer in the city centre could be enjoyed at the highest level. Jennifer was there herself and didn’t even want to say goodbye, although she is herself the happy owner of a balcony at home. The highlight of the event: the musical soundtrack to the summer dream scene by singer-songwriters such as Timothy Auldt, Tom Klose and Mister Me. Major Lazor was unfortunately not there, but “Light it Up” is still a hit that fits the autumnal mood on the balcony quite well…

From the late summer balcony back to the present: with the dream of a planted balcony in the warm September sunshine, we end the second part of our big throwback on the occasion of Jennifer’s 15-year ZUCKER.anniversary. Back in reality, you can already look forward to the next and last part of the time travel. Included: ZUCKER.s tips against broken hearts, all imaginable Christmas presents and even something for your ears! Be curious…